The body’s endocannabinoid system is composed of three parts: receptors, ligands, and metabolic enzymes. The two most common endocannabinoid receptors are CB1 and CB2. They are both located throughout the body, but CB1 receptors are more common in the central and peripheral nervous systems and the gastrointestinal system, while CB2 receptors cluster in the immune system, including the spleen and lymph nodes. Two main endocannabinoids have been identified to date: anandamide (AEA) and 2-arachidonoylglycerol (2-AG).
These endogenous cannabinoids are agonists, or ligands, acting on endocannabinoid receptors. Metabolic enzymes synthesize and degrade the endocannabinoids, regulating their levels. CB1 receptors are primarily located on presynaptic neurons. When a CB1 receptor is activated (by THC, endocannabinoids, or nabilone), it activates a signalling cascade that prevents the release of neurotransmitters into the synaptic cleft (for both excitatory and inhibitory neurons). Endocannabinoids are produced by postsynaptic neurons and work on the presynaptic terminal in a retrograde signalling process. CB2 receptors, on the other hand, are primarily found on immune cells and affect the release of cytokines and other molecules. 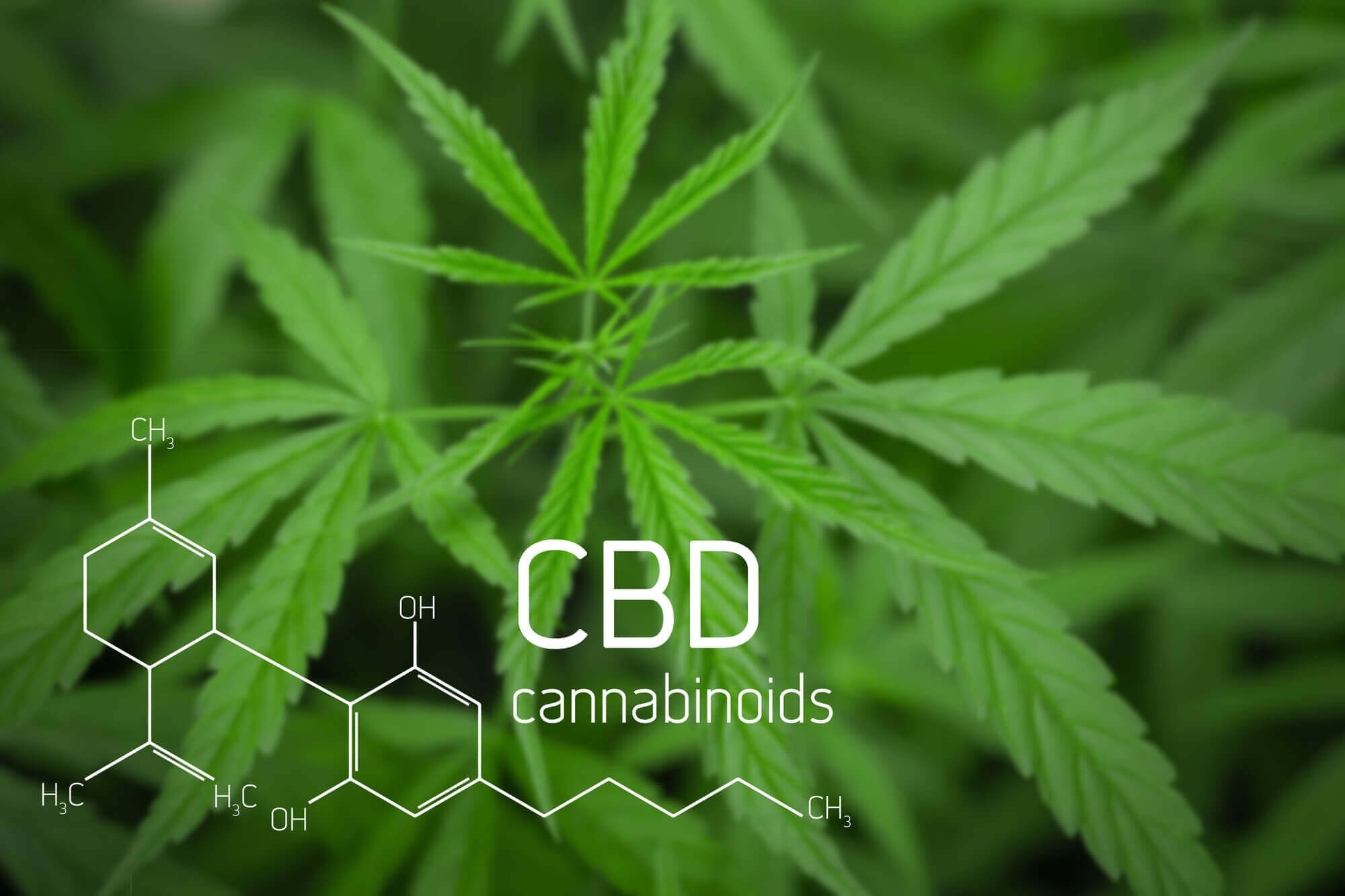 Via the CB1 and CB2 receptors, cannabinoids act on a number of pathways in the body, which allow them to affect systems as diverse as feeding behaviours, insulin sensitivity, stress responses, gut permeability, inflammation, and emotional states. THC exerts its effects primarily through the activation of CB1, while CBD doesn’t bind to either CB1 or CB2, but inhibits or activates other receptors, enzymes, and molecules.
The pathways underlying cannabis analgesia are only beginning to be understood, partly because there is no single site activated in the brain when pain is felt, and partly because cannabis may act on more than 20 pain pathways, including those not mediated by endocannabinoids. However, CB1 receptors are distributed more densely in the frontolimbic part of the brain, and this suggests that cannabis may preferentially target the affective qualities of pain. Studies using functional neuroimaging support this, showing that cannabis affects the activity of the anterior midcingulate cortex and the amygdala, both of which play a role in the emotional interpretation of pain. 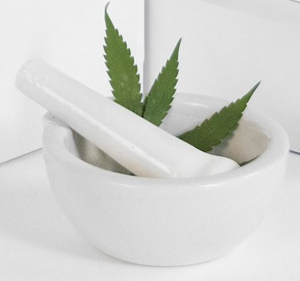 Cannabis is available as dried flowers, as cannabis oil, and as softgels or capsules containing the oil. It can be administered by ingestion of the oil or by smoking or vaporizing the dried flowers. Ingestion of oil, capsules, or softgels provides the most accurate dosing. Vaporizing (heating the cannabis to a temperature that volatilizes the cannabinoids and other compounds without combusting them) is preferred over smoking because it is associated with fewer toxic by-products and adverse health effects.
In addition, many cases of small patient populations, lack of randomization, lack of blinding, and a short duration of interventions have limited the conclusions that can be drawn. Rather than demanding larger and more rigorous RCTs (using which products? at what doses?) in order to learn more about medical cannabis use, it has been suggested that researchers look for surrogates, such as open-label, longitudinal, or case control studies. With enough data, statistical significance would be reached.
Another approach is the use of registries. Unlike RCTs, which tend to exclude patients with comorbid conditions, registries can include a wide range of patients and thus get data on the effects of cannabis use on concurrent conditions such as depression, anxiety, and insomnia.
Experts have also suggested that clinicians personalize their cannabis patient management through the use of n-of-1 trials: individual patient case studies in which experimental and control interventions are tried sequentially with their order randomized (to achieve patient and sometimes physician blinding). This approach is the epitome of individualized medicine and can be used in cannabis patients to determine the most effective combination of plant varieties and dosage forms.

Every chronic pain patient is different, and many chronic pain conditions are resistant to currently available treatment options. This is a ripe area for cannabis-based medicines, especially if they can reduce opioid use and the possibility of overmedication among pain patients. Few human trials have been performed using cannabis-based medicines, especially in inflammatory pain conditions. For example, the only trial done in rheumatoid arthritis pain was a randomized, double-blind, parallel-group trial comparing Sativex® with placebo in 58 patients.
4 Sativex produced statistically significant improvements in pain on movement, pain at rest, sleep quality, 28-joint Disease Activity Score (DAS28), and the short-form McGill Pain Questionnaire “pain at present” component. There were no adverse event–related withdrawals or serious adverse events in the Sativex-treated group. No clinical trials have been done in osteoarthritis pain, but two have examined intractable cancer pain. In their 2017 report, the National Academies of Sciences, Engineering, and Medicine in the United States concluded that there is moderate-grade evidence supporting the effectiveness of cannabinoids for the treatment of fibromyalgia.

Public support has grown for the availability of medical cannabis for palliative care patients, and reported benefits include improvements in pain, nausea, weight loss, appetite loss, insomnia, spasticity, stress management, and mood. However, evidence has been relatively disappointing to date.
A 2017 systematic review and meta-analysis of the efficacy, safety, and tolerability of cannabinoids (dronabinol, nabiximols, and herbal cannabis) in palliative medicine found only nine randomized controlled and/or crossover studies with a total of 1,561 participants, with quality of evidence rated low to very low.14 In cancer patients, the analysis found no differences between cannabinoids and placebo in caloric intake, appetite, nausea/vomiting, pain reduction, or sleep. In HIV patients, cannabinoids were superior to placebo for weight gain and appetite but not for nausea/vomiting. Safety and tolerability were similar to placebo in both groups.
However, a recent trial, not included in that meta-analysis, produced somewhat more promising results.15 Nearly 400 advanced cancer patients with chronic pain (≥ 4 and ≤ 8 on a 0–10 rating scale) unalleviated by optimized opioid therapy were randomized to Sativex (n = 199) or placebo (n = 198) and allowed to self-titrate for two weeks before remaining on the same dose for three weeks. Results showed improvement in the primary end point (median percent improvements in average pain score from baseline to five weeks) in the per-protocol population but not the intent-to treat population. Quality of life scores, however, showed significant improvements in the Sativex group, especially at Week 5 and especially in American patients, possibly due to patients in other parts of the world having more advanced disease.

Although there is a great deal of public interest in the cancer-fighting abilities of cannabis products, clinical trial evidence is lagging behind. However, there is a great deal of suggestive preclinical evidence. Since 1975, when Munson reported that THC reduced the growth of implanted Lewis lung carcinomas in mice,16 there have been dozens of investigations of THC and CBD in vitro and in mice and rats, many of which have produced positive results.
In one encouraging human safety study, THC was injected directly into glioblastoma multiforme tumours in nine patients who had failed standard therapy (surgery, radiation, and chemotherapy) and had evidence of tumour progression. The primary end point was the safety of intracranial THC administration, which was successfully demonstrated.
In addition, tumour growth was curbed for about nine weeks in one patient, along with clear improvement in clinical symptoms, and another patient’s clinical symptoms were largely improved. Cannabis may have a greater role to play in the management of cancer symptoms and chemotherapy side effects.
For example, dronabinol is effective in the management of breakthrough chemotherapy-induced nausea and vomiting (CINV) and is included among recommended CINV treatments by major oncology guidelines. One survey found that cancer patients themselves perceived improvements in pain, general well-being, appetite, and nausea with the use of cannabis.

An open-label trial gave patients with severe, intractable, childhood-onset, treatment-resistant epilepsy (who were receiving stable doses of antiepileptic drugs) oral CBD at 2–5 mg/kg/day, uptitrated until intolerance or to a maximum dose of 25 or 50 mg/kg/day.
38 Of the 162 patients in the safety and tolerability analysis, 128 (79%) reported adverse events, particularly somnolence, decreased appetite, diarrhea, fatigue, and convulsions. In the 137 patients in the efficacy analysis, monthly motor seizures were reduced by a median of 36.5% and completely resolved in some patients.

The social and occupational safety concerns associated with cannabis use in the home or the workplace tend to echo those associated with the use of opioids: driving, working with heavy machinery, tending small children, and so on. Unfortunately, most studies focusing on these issues have involved recreational, rather than medical, cannabis users.
As with opioids, common sense is vital: patients need to be reminded to be particularly cautious during the first days of cannabis use or after increasing the dosage. The College of Family Physicians of Canada recommends that medical users of dried cannabis be advised not to drive for at least four hours after inhalation, at least six hours after oral ingestion, and at least eight hours after either of those if the patient experiences euphoria.

The metabolism of cannabinoids involves cytochrome P450 (CYP450) enzymes, which brings up the possibility of drug interactions with other agents. However, very few clinical studies have shown relevant drug interactions with cannabinoids:
• Rifampin (a CYP inducer) decreases the maximum concentration (Cmax) and area under the concentration-time curve (AUC) of both THC and CBD.
• Ketoconazole (a CYP inhibitor) increases the Cmax and AUC of THC and CBD.
• Theophylline clearance is higher in frequent marijuanasmokers.
• Clobazam metabolism is inhibited by CBD (thus increasing clobazam concentrations).
• Abnormalities of liver transaminases and platelets were seen with concomitant THC/CBD therapy and valproic acid.
The April 2018 Canadian Pharmacists Association (CPhA) monograph for cannabis lists a number of additional potential drug interactions (anticholinergics, CNS depressants, CYP1A2 substrates, other CYP inducers and inhibitors, disulfiram, transdermal nicotine, and stimulants) but notes that many of these are theoretical or based on anecdotal reports from recreational cannabis consumers using high doses. One study investigated the interactions between cannabinoids and opioids.
Although it was a small trial of short duration, the results showed that cannabinoids had no significant effect on opiate metabolism and did not change opioid serum levels—and that cannabis appeared to augment the analgesic effects of opioids. In general, additive adverse events are a greater consideration than drug interactions when prescribing cannabis in patients taking other medications. Adverse events associated with cannabis-based medicines are primarily mediated by THC and tend to be dose-dependent.
Some currently known uses and applications
Hundreds of peer-reviewed studies indicate that CBD possesses almost unbelievable clinical potential.
Anti-emetic (reduces nausea and vomiting)
Anti-convulsant (supresses seizure activity)
Anti-psychotic (combats psychosis disorders)
Anti-inflammatory (combats inflammatory disorders)
Anti-oxidant (combats neurodegenerative disorders)
Anti-tumoral/anti-cancer (combats tumour and cancer cells)
Anxiolytic/anti-depressant (combats anxiety and depression disorders)
Vasorelaxant to help with glaucoma
Stress reduction and mood regulation
Improved sleep quality
Improves hair and skin health
Inflammatory pain relief
Neuroprotective qualities
Assists in some symptoms of Multiple Sclerosis and Parkinson’s Disease 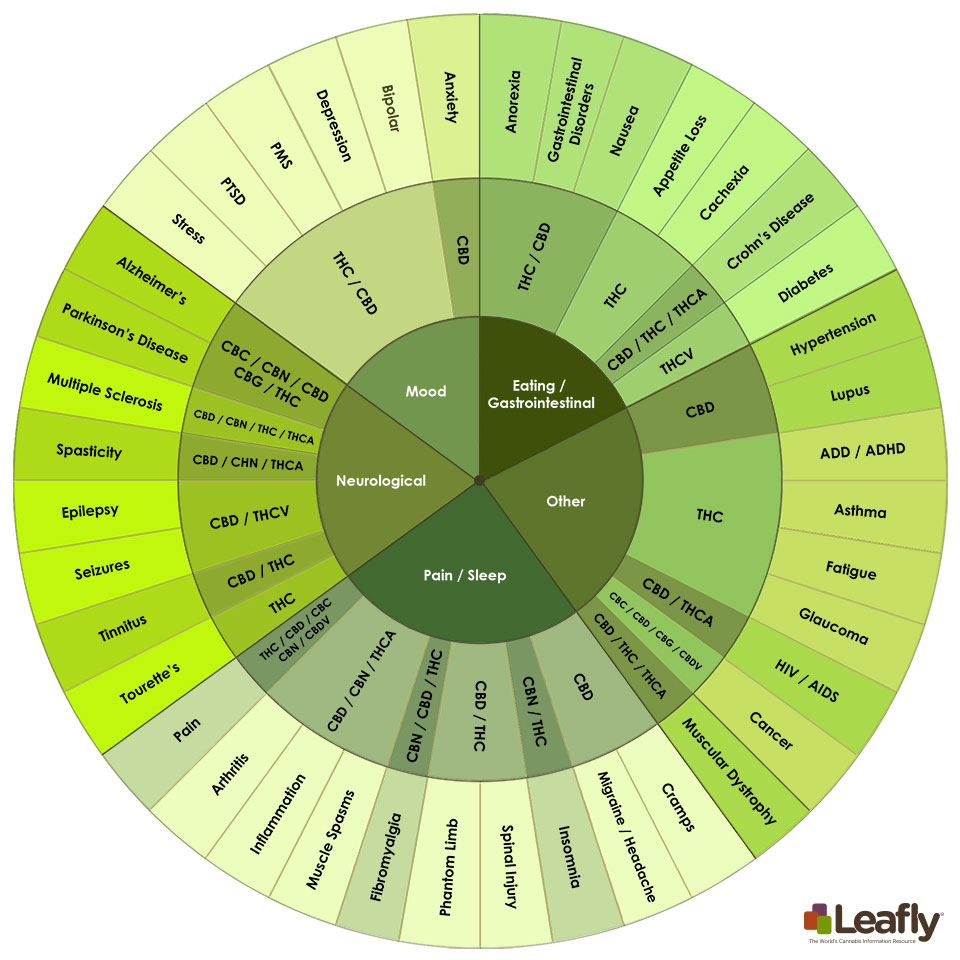